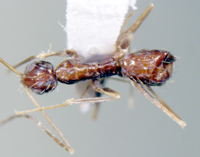 The life history of this species is poorly known. Crazy ant colonies tend to be small to moderately sized, containing as many as 2,000 workers and 40 queens. Mating flights have not been observed; colonies possibly split and form new colonies by budding. Crazy ants are highly adaptable in their nesting habits and can live in habitats that are very dry or relatively moist. Colonies are highly mobile and relocate when conditions become unfavorable. Outside, they nest in rotten wood, fallen tree limbs and logs, tree stumps, under stones, bricks and lumber. They often are found in the soil of potted plants. Numerous colonies may be found around plant roots in mulched plant beds. Queens, brood and attending worker ants often are found in curled leaves littering these plant beds. Inside, crazy ants often nest in wall voids and beneath floors, particularly near hot-water pipes and heaters.

This is an introduced species thought to be of African or Oriental origin. It has been spread around the world through commerce. The crazy ant, Paratrechina longiconis is well established in the southeastern United States. It occurs from South Carolina to Florida, west to Texas, where it is prevalent in towns and cities. It commonly occurs in California. Its distribution is sporadic in inland and northern areas, where it can only survive indoors. Colonies are highly mobile and relocate when conditions become unfavorable. Crazy ants are highly adaptable in their nesting habits and can live in habitats that are very dry or relatively moist. Outside, they nest in rotten wood, fallen tree limbs and logs, tree stumps, trash and litter, and soil under objects such as stones, bricks, and lumber. They are often found in the soil of potted plants and in mulched plant beds.

At the foundation of any IPM strategy are cultural control methods.  These begin with the removal of harborage such as fallen limbs, rocks, leaf litter, and just about anything sitting on the ground that isn’t absolutely necessary.

Cultural methods can also include altering the moisture conditions in a landscape:  Crazy ants prefer humid, wet conditions so reducing the amount of irrigation, repairing leaks, and improving drainage should help.  Entrances into structures should be eliminated or minimized by caulking exterior penetration zones and through the use of weather-stripping.

Prevent spreading these ants to new locations: Anything being moved from an infested area should be inspected for ants and treated before transferring it to a new site.

Don’t encourage these ants by feeding them: Food sources should be eliminated or managed.  Specifically honeydew producing hemipterans should be managed.

Chemical control: Contact insecticides should be sprayed around structures such as homes, businesses, and barns to create a barrier.  Products containing fipronil (e.g., Termidor®) are an excellent choice for perimeter contact insecticides for crazy ant management.  An indoor crack and crevice regime with a product containing chlorfenapyr (e.g., Phantom®) has been effective for this species.  As many nesting sites as can possibly be found should be sprayed using a product with beta-cyfluthirin (e.g., Temprid®) or bifentthrin (e.g., Talstar®) which have directions on their product labels that allows for such usage.  Granular ant baits, such as Advance® Carpenter Ant Bait (abamectin) and Maxforce® Granular Insect Bait (hydramethylnon), are both attractive and effective at killing crazy ants.  A granular bait should be selected for broadcasting throughout the infestation.  Liquid carbohydrate baits should be strategically placed in high crazy ant traffic areas.  PCOs need access to an entire infestation in order to achieve an acceptable level of management.  Otherwise, the population will rebound from surrounding, untreated sites.